Beginning in the 1990’s, Dr. Maseru Emoto and his team began a series of experiments to decide if vibration could affect reality. Dr. Emoto’s messages from water challenged notions of what could be possible in the physical realm. But is there a way to actually apply this science?

What are Dr. Emoto’s messages from water?

Dr. Emoto’s team began observing water in the 1990’s. They hypothesized that because water is in a moving, vibratory state, it could be affected by other vibrations. The team spent years figuring out how they could best view this. Once they discovered a process to rapidly freeze water to preserve its crystalline structure, the experiments were underway.

The result of these experiments was Emoto’s messages from water series. Dr. Emoto and his team directed specific vibrations at glasses of double distilled water in hopes of finding out how vibrations affect reality. This was not an unattainable method either. The team used the simplest forms of vibrations which we come across every day: written words, thoughts, and music.

The results of these experiments were astounding. The team found that water was undoubtedly affected by vibration, and there may be a way to harness this knowledge for the greatest good.

Everything in the universe is vibrating. Solid objects are vibrating slowly. Gases are vibrating quickly. Light is just waves moving even faster. There are even waves that are so fast we cannot perceive them. like microwaves and ultraviolet radiation. It is easy to see how vibrations affect one another from this standpoint.

When a martial arts master breaks a plank with his hand, it is just an act of vibration. The vibratory shock delivered by the force of their hand is too great for the plank to handle. The plank begins violently shaking and ultimately splits apart under the power of this vibration.

This seemingly destructive power can be used for amazing results. This is especially true with water. Dr. Emotos team found that when glasses of water were exposed to positive vibrations like classical music or kind phrases, the crystalline structure of the water was more patterned and beautiful than before. 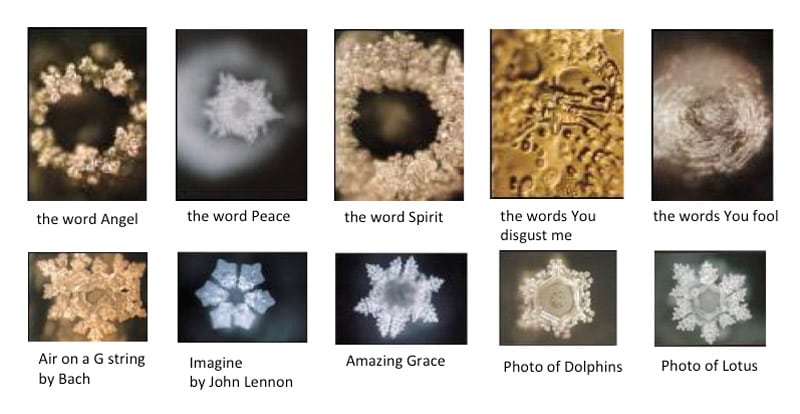 Their tests also showed that negative words, actions, or sounds made water crystals more ugly or chaotic. Just like the wooden plank, the water molecules could not handle these violent vibrations and were torn apart.

These tests showed the same results over and over. Vibration affects our world in ways we could never imagine!

How to harness the power of Emoto’s messages from water

The world needs to harness the power of Emoto’s messages from water.  The human body is  60-70 percent water. This means vibrations influence everything we do, and there has to be a way to control this. 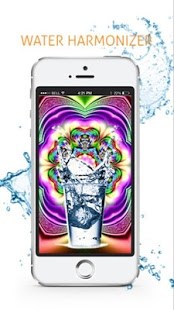 If it were possible to infuse water with Ancient solfeggio healing tones and kaleidoscopic fractal animations  based upon recursive mathematics, you would end up with results like Dr. Emoto’s messages from water. This is because the process actually restructures the crystalline structure of water, creating a smoother sweeter tasting water.

The great news is – this is possible. And it does not take an expensive machine to do so. Water can be restructured and empowered by vibrations emitted from an app.

We have created the water harmonizer app, which does just that. It balances and restructures the water using positive vibrations and images. Dr. Emoto’s messages from water was such an inspiration that we knew we had to take action. There had to be a way to bring this to the people.

Our bodies have been kicked around for too long. It is time to get back to feeling amazing. We have the opportunity to do just that using the power of fractals and vibration. We are offering our users a free trial for a limited time only, so they can see the power of this amazing app. Download the app now to start harmonizing your water and your life.